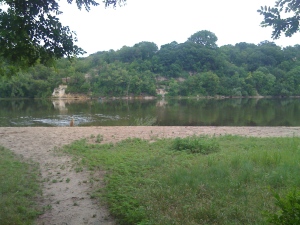 “But who, Venerable One, is it that feels?”

“This question is not proper,” said the Exalted One. “I do not teach that there is one who feels. If however the question is put thus: ‘Conditioned through what, does feeling arise?’ then the answer will be: ‘Through sense-impression is feeling conditioned… through feeling, craving… through craving, clinging…'”

on this nameless beach along the Mississippi River, i remember seeing a young couple making out as they laid in the grass. i’ll never forget how lonely i felt at that moment. a few months later, i sat in meditation on the beach, and it was then that something became very clear. and a few weeks later, having figured out the words to say, i forgave someone. a year later, i kissed this person on this beach.

two years have passed since i saw that young couple, and i went down to the beach one evening recently looking to sit and meditate. frequent downpours this june have left the mississippi sitting high, and where the water has receded, there are brackish, muddy swamps. this evening, there were a few people, a bonfire, and some friendly, wet dogs. the wooden pallet i was hoping to sit on had been turned into firewood.

i walked south along the beach toward it’s end, where it disappeared into trees, unable to find a comfortable, quiet spot to sit. the air was still, hot and heavy. the mississippi flowed swiftly. i walked further down the river bank, now into the forest. as i walked, i became frustrated. there was nowhere to sit without a cloud of mosquitos. their bodies green, just like the algae covering the swamps. it was close to dusk after all. they were waking up.

i felt like i had to meditate that evening. it had been awhile, my mind was restless, i wanted insights. i pictured myself sitting along the bank in deep meditation. mosquitos crawling all over me. and what would that prove, i asked myself, mindfulness beginning in me. what would it prove to anyone that i could sit in meditation for thirty minutes along the flooded banks of the mississippi being bitten hundreds of times by mosquitos.

then the part of me that wants and craves was saying: yeah, film me doing it. take pictures of me doing this stunt. look at “the buddhist” so detached from suffering that he feels nothing. definitely the kind of thing to put in a facebook status update. “check out my extreme meditation technique on my own spiritual beach. i must be very spiritual. spirituality is about accomplishing and notching belts and boasting”. as if nothing must happen to interrupt what i am about to accomplish.

bite after bite. frustration. mindfulness. the mosquitos were hungry, and doing what they always do. why was i taking them personally? i don’t have to meditate here, must i? it’s beautiful whether or not i meditate here. these thoughts in mind, i walked slowly back through the forest to the beach, from the river bank up the stone stairway to the bike path, got on my bike and rode home. frustration gone. thinking of anatta.

Then the wanderer Vacchagotta went to the Blessed One and, on arrival, exchanged courteous greetings with him. After an exchange of friendly greetings & courtesies, he sat to one side. As he was sitting there he asked the Blessed One: “Now then, Venerable Gotama, is there a self?”

When this was said, the Blessed One was silent.

“Then is there no self?”

A second time, the Blessed One was silent.

Then Vacchagotta the wanderer got up from his seat and left.

anatta is the insight that feelings are conditioned by senses. as the senses and conditions that give rise to these feelings are always changing, we suffer if we hold onto feelings as if they were personal, and “mine”, and eternal, and never changing. as if such things that are constantly changing could possibly make up a permanent self. perhaps this is why anatta is such a difficult mark of existence to understand in our facebook world, our “this is me, i am what i do, i am this identity”.

anatta doesn’t judge identity as right or wrong. it simply asks, is identity really there to hold onto? and buddhism simply asks, are you aware how much you’re suffering by holding on so tightly to something which isn’t there? i could meditate perfectly as a perfect buddhist, but i could not prevent small winged insects from biting me. i could identify my self as a buddhist all day long, but the mississippi will still flood it’s banks, swamps will still form, mosquitos will still bite me, and their bites all over my arms and neck will still itch like crazy. which they do.

and the person i kissed on the beach? well, thoughts of her were why my mind was so restless…

for more information, and the specific suttas used above, please visit:

“The Three Basic Facts of Existence: III. Egolessness (Anatta)”, with a preface by Ñanamoli Thera. Access to Insight, 5 June 2010, http://www.accesstoinsight.org/lib/authors/various/wheel202.html. Retrieved in 20 June, 2012.

This site uses Akismet to reduce spam. Learn how your comment data is processed.